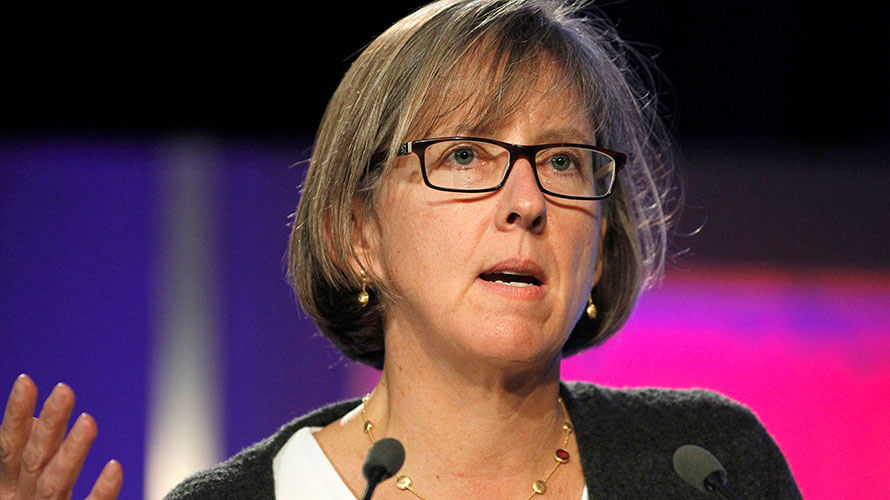 Some top trends lists come at the beginning (or end) of the year. But not Mary Meeker’s list of Top Internet Trends, which arrives mid-year and has become an annual rite for anyone following technology trends and how they affect business.

Meeker has been dubbed “Queen of the Internet” and delivers this eagerly awaited list in the form of a massive presentation each year at Recode’s Code Conference. This year she presented a record 333 slides. Meeker is a general partner at Bond Capital (formerly a partner at Kleiner Perkins Caufield & Byers) and her insights will help steer business decisions into 2020.

A central tenet for 2019 is that Internet use is still growing, but is harder to find. More than half of humanity is online today, mobile devices are preferred over desktop units and smartphone shipments are slowing worldwide. E-commerce growth continues apace, but its rise at the expense of physical retail is slowing. And when it comes to advertising, customer acquisition costs look to be increasing at unsustainable levels.

This is all being fed by data — a data firehose, as Meeker calls it – that is both fueling better customer experiences and presenting potential problems for the world’s technology giants.

For the first time, online hours have exceeded traditional TV viewing with more than half of humanity online today. Internet usage is still growing, although at a slower pace than in the past. We’ve shifted even more to mobile devices and are watching or interacting with more than one screen at a time – 26% of adults report being online almost constantly, according to the Pew Research Center.

For the first time, online hours have exceeded traditional TV viewing with more than half of humanity online today. Internet usage is still growing, although at a slower pace than in the past. We’ve shifted even more to mobile devices and are watching or interacting with more than one screen at a time – 26% of adults report being online almost constantly, according to the Pew Research Center.

Roughly 88% of TV viewers use a second digital device while watching, 71% look up related content and 41% message friends and family about the content. There’s an opportunity here to create better ad experiences with multi-device messages.

Internet ad spend increased 22% in 2018, compared to 21% lift the year before. Again, there is a bigger slice now being allocated to mobile than desktop.

Ad spend is better matched to viewing habits, compared to 10 years ago. But Meeker predicts uncertainty ahead for advertising as privacy concerns and a changing regulatory environment could cause a deceleration in revenue growth in 2019.

Programmatic buying continues to gain at the expense of direct.

Big tech is facing big challenges and the dominance of Google and Facebook may be waning, according to Meeker. The Big Two still dominate, but new players are gaining share with Amazon, Twitter, Snapchat and Pinterest up more than 2.6x, in terms of ad spend.

“Instagram, Google and even Walmart have all made competitive moves in the space,” Wes MacLaggan, SVP of marketing at Marin Software told AdAge. “As customers spend more time than ever on digital media — 6.3 hours per day — and e-commerce contributing to 15% of all retail sales, advertisers have a captive audience ready to click ‘buy.”

Digital video viewing has doubled in the last five years and short form viewing, such as Facebook stories, doubled in a single year, notes Meeker. This is helping fuel platforms such as YouTube and Instagram.

Voice, too, is gaining in popularity, and not just among voice-activated devices such as smart speakers. Podcast listening has exploded – doubling to 70M listeners in the US in just four years.

Pictures tell a story. Images are an increasingly relevant way to communicate and Meeker paints a pretty one by outlining how humans have long been visual storytellers. She posits that Instagram has always been a communication platform and not simply an image share tool.

Direct messaging and new communication platforms are on the rise. A growing percentage of messages are now being sent through encrypted chat (data), marking a move away from ecosystems plagued by security issues.

Interactive gaming platforms are also on the ascent. In particular, Meeker points to platforms like Fortnite, which is emerging as a new kind of social network. The multiplayer video game has close to 250 million active users globally and a single event – a DJ Marshmello concert – drew nearly 11 million people. Twitch and Discord are two additional platforms to watch, notes Meeker. All are popular with younger users – Millennials and Gen z.

Bottom Line: Personalization is a priority in 2019

Consumers increasingly expect personalization from brands, in ways that go beyond remarketing, which more than 40% of consumers dislike according to 2019 Intent Lab research.

Data needs to inform personalization efforts, like those coming from brands like Stitch Fix, which uses stat-driven personalization to keep customers engaged from month to month, according to Meeker. Data-driven models such as these, will drive marketing programs through the next year.